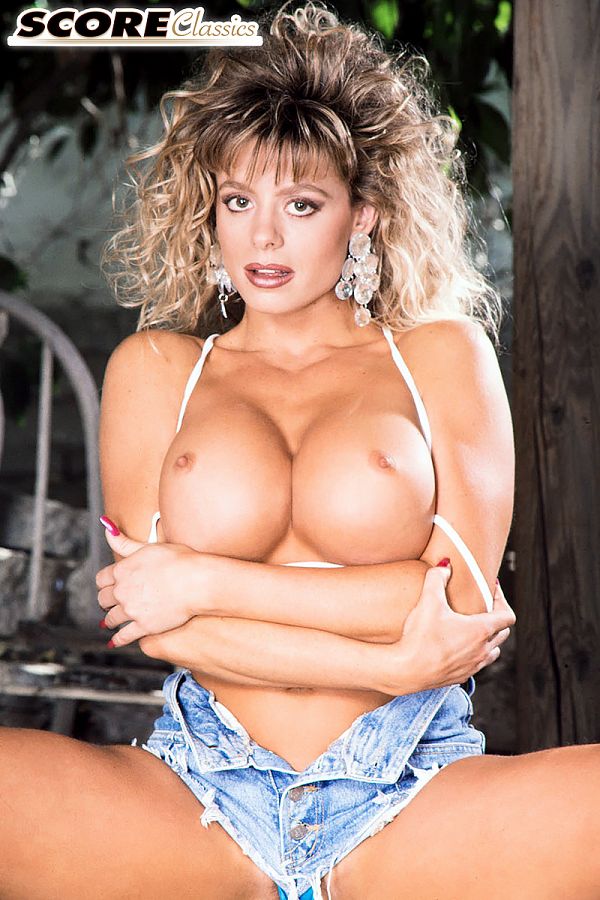 After high school in Northern California, Becky Sunshine studied hair and make-up. She moved to Newport Beach where she worked as a stylist. Becky caught everyone's eye no matter where she went, and when she went to the beach, she practically owned it. It was inevitable that she would become a model.

As an amateur model selling her own videocassettes, she caught the eye of a SCORE staff member at a video convention in 1993. He contacted the office about her and that led to Becky's first shoot in California. A few months later, Becky was on her way to London for round two.

This is one of the California sets and Becky is every inch the Cali Girl in her bikini, Daisy Dukes, white tank-top and cowgirl boots.

Becky went girl-girl and used toys. As far as we know, she never did hardcore with a male but it's possible there are old tapes shot at home with boyfriends. She made many at-home masturbation and girl-girl videos and other products like photo CDs and signed pictures that she sold through the mail and in person at conventions such as Glamourcon. She did girl-girl videos with Danni Ashe, Bonnie Michaels and others, and appeared in several of writer Dirty Bob's documentaries shot during adult conventions. (She won his "Starlet of the Year" award.) She also made a tape with Russ Meyer actress Edy Williams (The Seven Minutes, 1971).

Becky tried feature dancing on the road but it was too rigorous and uncomfortable a lifestyle for a homebody like her. Becky's magazine layouts caught the attention of Carnal Comics publisher Jay Allen Sanford. His Carnal Comics line included issues about Minka and Sarah-Jane Hamilton. Published in June, 1995, Becky Sunshine #1 was a departure from the Carnal formula of biographies of adult entertainers in comic book format. This issue was created by Becky and her artist friend Genevieve and was more about fantasy stories than back-story.

The last time we saw Becky was at the Tropicana Hotel pool in 1998 during the Gentlemen's Club Owners Expo. Becky had the crowd of male attendees working their cameras hard as she posed in a bikini for them. What she's doing today, 20 years later, is unknown.