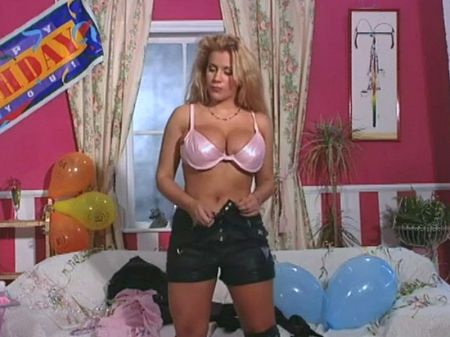 Voluptuous magazine celebrated the 18th birthday of British bra-buster Dawn Phoenix in the November 1996 issue. Dawn was the cake and candy-covered covergirl and centerfold in a ten-page spread. This video was sold in VHS format when the magazine arrived at newsstands. The set was a cake-disaster area by the time Dawn was through. The camera followed her into the shower as she cleaned off.

The explosion of exposure put newcomer Dawn's name on everyone's radar and she was in demand very quickly in the UK and Germany (often the story with A-list SCORE models). The birthday party theme for a newcomer proved so popular, it was repeated in the December 1996 SCORE for Linsey Dawn McKenzie when she turned 18.

Besides having a show-stopping body for an 18-year-old, Dawn has long, thick pussy lips that she would tug when the photographers requested it.