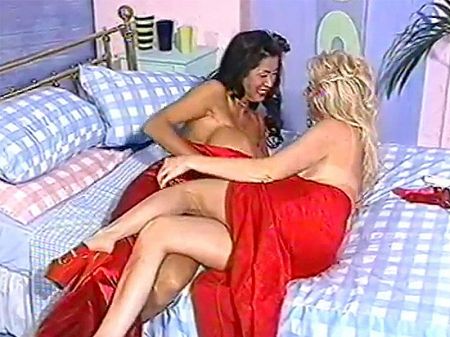 Minka and Kayla Kleevage became fast friends when they met and often traveled to England for SCORE shoots. This scene was published in February 1998 SCORE. The video is part of Bosom Buddies 3. This version is the original before it was edited for release through mail order.

A lady friend showed Minka SCORE. Minka remarked later, "I saw the telephone number and that's what I called. I sent three Polaroid pictures. John Graham got the pictures, then he called my house. He said, 'An airplane ticket is going to be at your house in one or two days. I want you to come to England.' That's it. So I went to England. And he took a test picture and said I would be on the cover, and then he said that I would be a feature dancer. When it came to the feature dancing, I followed what Lisa Lipps and Casey James were doing. I didn't know how to dance that way. I didn't know how to sing. I didn't know how to take off my clothes. But I knew how to smile, and I learned what to do."

We once asked Kayla why guys love big boobs. "I don't know. But I've always thought if I had to do a research paper, I'd want to do one that would ask guys that like boobs how many of them were breast-fed. Were they breast-fed or weren't they breast-fed? That's what I'd like to know. A couple of people told me they weren't breast fed and they still liked big boobs. I guess people associate big tits with femininity. I don't know. I mean they are fun to look at and nice. They feel good. I have to agree."